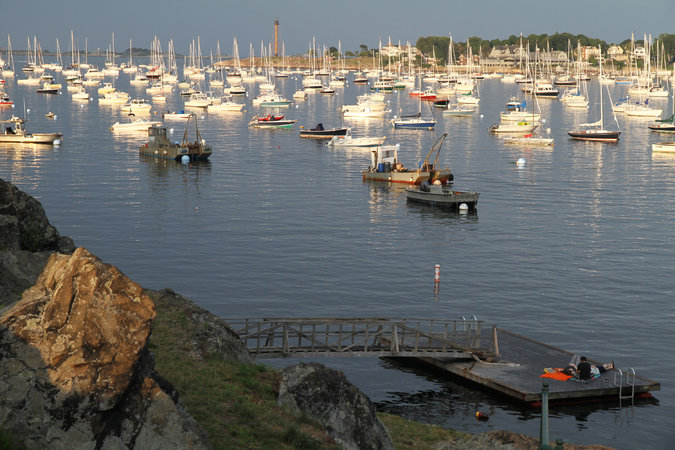 Marblehead, Mass., less than an hour up the coast from Boston, is one of those straightforward places where merely strolling around is the top attraction. That’s mostly thanks to its historic center, home to nearly 300 Colonial-era houses — the most of any town in the United States, according to the local Chamber of Commerce. The fishing town was one of the most prosperous in the colonies. Shipmasters, bakers and cordwainers alike found the money to build solid and beautiful homes that are still much in demand today.

Remembrances of those livelihoods (cordwainer is an old term for shoemaker) still exist: Many of the lovingly maintained homes bear signs with not only the year they were completed but also the name of and profession of the man (and occasionally woman) who had them built. And the town maintains a lovely disposition. In midsummer, when flower beds are bursting with life, Marblehead is about as close to a movie set as any place with asphalt and street parking can be. That look, as well as its rich history and a pleasant waterfront scene, make it a fun and easy side trip on a vacation to Boston or elsewhere in New England. 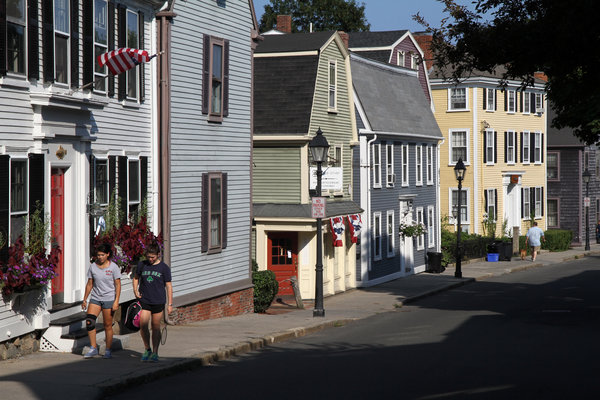 The historic center of Marblehead. Credit Seth Kugel for The New York Times

For a particularly exuberant take on the town, start your visit with the two-hour audio tour you can stream from the Marblehead Chamber of Commerce’s website. Annoyingly, you can’t download it, and, fair warning, it can drone on. But it will give you a full background of the history of the town — from its seafaring origins to its role as a “bustling colonial metropolis” (its population in 1790 was a robust 5,600) to the devastating economic impact of the Revolutionary War to its 19th-century days as a shoemaking center. And there’s plenty of detail — more than you’ll want, perhaps — on its architecture.

There will also be some unexpected discoveries, like the original “Spirit of ’76” painting by Archibald Willard, created for the Centennial Exhibition in Philadelphia in 1876 but now on display in Marblehead’s Abbott Hall, which was built the same year. The building is not only the town’s administrative center but also a mini historical museum; if your handwriting decoding skills are up for it, you can also read the deed from the purchase of the town’s land from the Naumkeag Indians in 1684.

It’s also free. Housing, of course, is not, but I was able to stay in the historic center (a must for most visitors) and keep under my unofficial Frugal maximum of $ 100 a night by reserving a room in the Nautilus Guest House, where a room for one is $ 95 a night. (A few other places within my price range can be found on the Chamber’s website.) The Nautilus is what I call a BNB — bed-not-breakfast — guesthouses with cutesy décor that seem as if they should come with a stack of whole grain pancakes and well-sourced bacon but don’t. The Nautilus was mostly very pleasant — the owner, Maryanne Bajakian-Dermody, even had a free bike for me to borrow. The bed was bouncy and creaky, but for $ 95 a night just across from the harbor in the absolute center of town, I’m not complaining. (The room was payable by cash or check; I paid by check, which itself seemed like a 18th-century throwback.)

I won’t complain about the lack of breakfast, either, since Marblehead has more cheap eats than you might expect for such a place. I think that’s in part because tourism does not overwhelm the town — even in midsummer, right in the historic center, tourists were easily outnumbered by locals. Maryanne told me to eat right across the street in the Driftwood, an ancient-looking red shack that is just tidy enough from the outside to looks like it could be pricey. But instead, it’s a regular old coffee shop; I sat at the counter, ordered a $ 4.50 bacon, egg and cheese on a grilled English muffin and eavesdropped on some vintage “Mahblehead” accents. 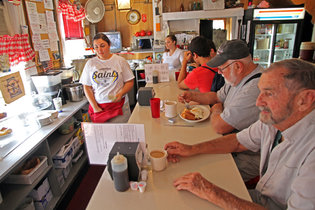 The Driftwood, a tiny restaurant near the harbor. Credit Seth Kugel for The New York Times

For an equally cheap — and cheerier but less vintage — breakfast on my second morning I went to the Muffin Shop two blocks away, where excellent muffins go for $ 1.65 and go fast; charmingly, you can call and have a favorite flavor set aside (I’d go for oatmeal marmalade). The place also has an even cheaper breakfast sandwich ($ 3.75) than the Driftwood.

Aside from those and some more expensive eating places, the town’s other businesses are what you might expect — some cute boutiques and souvenir shops, which I skipped, and a handful of historical attractions I did not. The Old Burial Hill cemetery has artfully crooked gravestones from the late 17th and 18th centuries, on a hill overlooking the harbor. (It’s an optional part of the walking tour, but I went separately and found it an excellent place for an afternoon nap.)

For $ 10, you can visit the town’s most elegant home, the Jeremiah Lee Mansion, a part of the Marblehead Museum and Historical Society . (It’s cash only, though in a pinch you can take part in an historical re-enactment of that ancient ritual of personal check-taking.) The late-Georgian era house — whose wood siding is scored to look like stone — is extraordinarily well preserved, since Lee’s family was the only one to live there. That’s because Jeremiah Lee himself, a wealthy merchant who helped fund the patriot cause, died just as the Revolution was getting underway.

The same night of Paul Revere’s ride, he, Samuel Adams and John Hancock fled a tavern in Lexington as the British approached. But whereas the other two turned into heroes and signed the Declaration of Independence, Lee caught a cold hiding in nearby fields and died soon after. The mansion was taken over by a bank, which made few changes, and then was purchased by the historical society early last century. 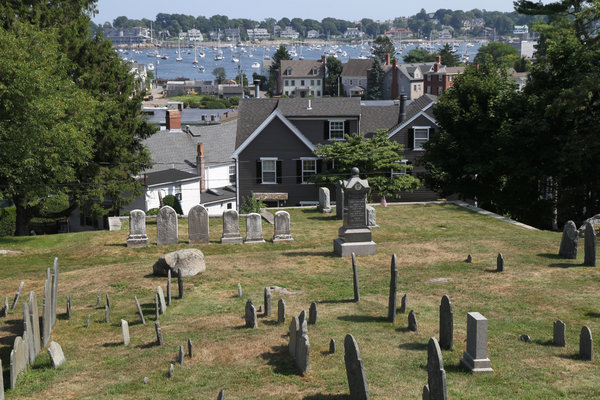 Among the most impressive features — though, if you ask me, not the most attractive ones — is the well-preserved grisaille wallpaper, in well over 40 shades of gray, that was fashionable at the time.

Aside from its historic houses, Marblehead’s main attraction is its harbor. In midsummer, it is so packed with sailboats that were it an aquatic parking lot for a big box store, you’d be tacking and jibing forever before you found a space. I took the bike on a pleasant three-and-a-half-mile ride out past the town’s pleasant-enough Devereux Beach and to the end of Marblehead Neck, the near-island (it’s connected by a causeway) of elegant homes with preposterously well-tended lawns. It ends in a park with an unusual cast-iron lighthouse built in 1896. Since chartering a sailing trip was way beyond my budget, I rented a stand-up paddle board for an hour ($ 20 even) from East Coast Style SUP, an operation across the street from Devereux Beach, and wended my way around the calm harbor.

Though breakfast was cheap, the restaurants around the historic center turned out to be hazardous to budget travelers; the solution was a quick drive or bike ride (or walk) out aptly named Pleasant Street toward a modern and only moderately unattractive strip-mallish area full of cheap options. For dinner one night, I went to local favorite Village Roast Beef & Seafood, the roast beef on an onion roll is cheap ($ 7.99) and humongous (10 ounces of thinly sliced medium-rare meat), but I went for the fish and chips special for $ 4.95, as well a hefty triangle of the house-made Greek-style baklava for $ 2. Though there are seats, it’s primarily a takeout place, and I took my meal up to Crocker Park, which overlooks the harbor. The next evening I had what is almost certainly the cheapest lobster roll in town, $ 9.99 from Manhattan Sandwich Company, near the Village Roast Beef.

Without money to spend, there wasn’t quite enough to do in Marblehead to fill two days, but luckily, the bigger town of Salem is next door. I spent half of Day 2 there, skipping the tacky witch-themed attractions and spending a worthwhile $ 18 on the local treasure, the Peabody-Essex Museum, founded in 1799 as the East India Marine Society, a “cabinet of natural and artificial curiosities” where local captains involved in the China trade donated items from their wide-ranging travels.

Many of those objects are still on display in the original East India Marine Hall, though the complex is now a world-class art museum that maintains both a local feel and decidedly maritime theme, especially if you can get there before an exhibition of work by the English seascape painter J. M. W. Turner closes on Labor Day. Free tours of the museum by enthusiastic docents further make up for the pricey entry fee, as does a quick drive to Salem Willows Park.

That’s where, alongside an arcade and restaurants selling pizza and fried Oreos, a throwback Chinese-American spot called Salem Lowe at 197 Fort Avenue sells a locally legendary chicken chop suey sandwich. It’s most definitely not as genuinely Chinese — or as artful — as the objects sea captains brought to the museum in the 19th century. In fact, it’s quite messy and not all that tasty, but it’s filling and fun and at only $ 2.01 plus tax, is a literally small price to pay to keep a trip to this otherwise deliciously historic area affordable.