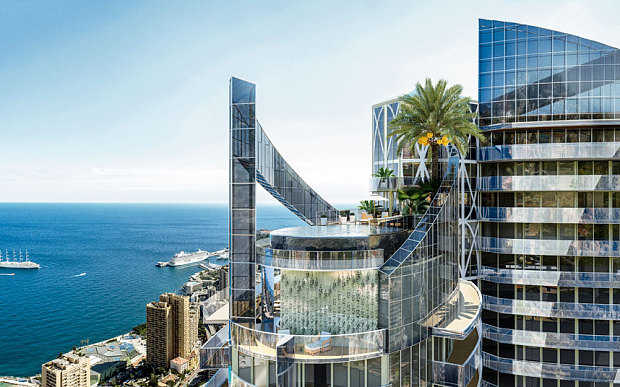 The luxury flat at the top of a new skyscraper could set its new owner back more than 300 million euros (£240,000,000) – making it the world’s most expensive penthouse.

It’s already the destination of choice for anyone seeking luxury, extravagance and glamour.

With its palm tree-lined boulevards and clear blue Mediterranean waters, the small city state has been attracting the fabulously wealthy for decades.

But now Monaco could become – quite literally – the playground of the rich and famous after developers announced the arrival of a five-floor penthouse with giant infinity pool and its own slide overlooking the sea.

The luxury flat at the top of a new skyscraper could set its new owner back more than 300 million euros (£240,000,000) – making it the world’s most expensive penthouse.

Tour Odeon, which houses the 35,000 square foot flat along with 70 more huge apartments, will be the first new skyscraper to be built in Monaco since the 1980s.

At that time, the country’s then-ruler Prince Rainier called a halt to tall buildings on the shoreline so as to avoid overshadowing Monaco with skyscrapers. Instead he encouraged the development of wider, lower buildings built on an extension into the sea.

However, his decision was reversed in 2009 by his son and successor Albert and plans for the 560 foot Tour Odeon were drawn up.

The penthouse will have three staff bedrooms and will be equipped with a water slide connecting a dance floor to a circular open-air swimming pool.

Its new owners will also have access to a health centre, several swimming pools, a private chauffeur, a 24-hour concierge service and an in-house caterer.

Monaco is home to a host of celebrated musicians, sportsmen and business tycoons who could be contenders for the property.

Famous for its Grand Prix, the city state houses a number of Formula One drivers including Jenson Button and Lewis Hamilton, who swapped his Switzerland home for the French Riviera two years ago.

One in three of Monaco’s 38,000 residents are millionaires, according to a study by Spear’s magazine and WealthInsight.

Irene Luke, of Savills, who moved to Monaco in 1990 from London, said it was becoming increasingly popular with wealthy Britons concerned about next year’s election after Labour and the Liberal Democrats proposed a mansion tax on properties worth more than £2m.

“It’s becoming more and more like London by the sea,” she said.

James Price from Knight Frank, which is handling the sale of flats in Tour Odeon, said: “These duplexes and the penthouse are set to catch the eye of those looking for the very best properties across the world’s leading markets.”

The property is expected to go on the market next year. If it sells for more than 300 million euros as expected, it would be the world’s most expensive penthouse, according to property consultants Knight Frank LLP.

But Daniele Marzocco, a director at the company, said: “We think we can get a little bit more.” So far, 26 of the 36 luxury homes have been sold.

http://www.coachingbysubjectexperts.com/marketing-coach/ (We are looking for product) See our call to action for coaches.
Video Rating: 4 / 5