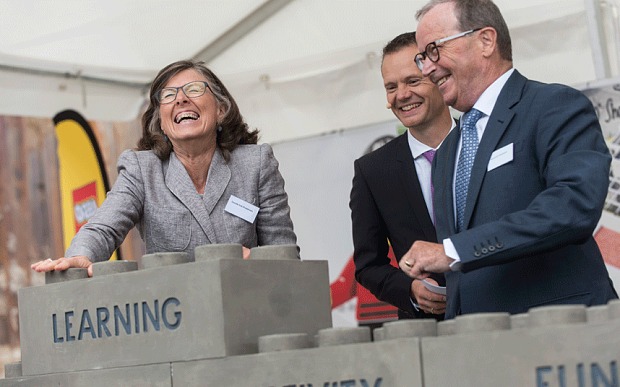 Brick by brick: the foundations for the Lego House are laid Photo: Lego Group

Many of us spent hours as children building houses out of Lego – and now, a house structured from “real-life” Lego bricks is being built.

The first six foundation stones of the “Lego House” were laid yesterday in Billund, Denmark, where the toy company is based.

What the Lego building is expected to look like (LEGO GROUP)

The architectural design will be resemble a pile of 21 large Lego bricks and will be a visitor centre where fans of the tiny plastic bricks can learn about the history of Lego. Twenty-three metres tall, the building will feature various “experience” areas, a café, a Lego shop, as well as several open roof terraces.

Three generations of the family of Ole Kirk Christiansen, who founded the construction toy company in Billund in 1932, helped to lay the stones for the house, which is expected to open in 2016.

“For my family and me, the Lego Group has always been much more than just a company and our products more than just products. I am very passionate about play and how children learn through playing with Lego bricks. This is essentially the Lego idea and what the Lego House is all about,” said Kjeld Kirk Kristiansen, grandson of the Ole Kirk Christiansen and current owner of the company.

Bjarke Ingels, the architect behind the Lego house said: ‘It will appear like a cloud of interlocking LEGO bricks that form spaces for exploration and exhibition for its visitors within. On the outside the pile of bricks form the roof of a new covered square as well as a mountain of interconnected terraces and playgrounds.

Take an interactive tour of the Lego House

“For me the Lego brick embodies the notion of systematic creativity – that the rigour and rationality of the Lego brick allows children of all ages infinite possibilities to create their own worlds and to inhabit them through play,” he added.

The company hopes that the Lego House will draw around 250,000 people annually.